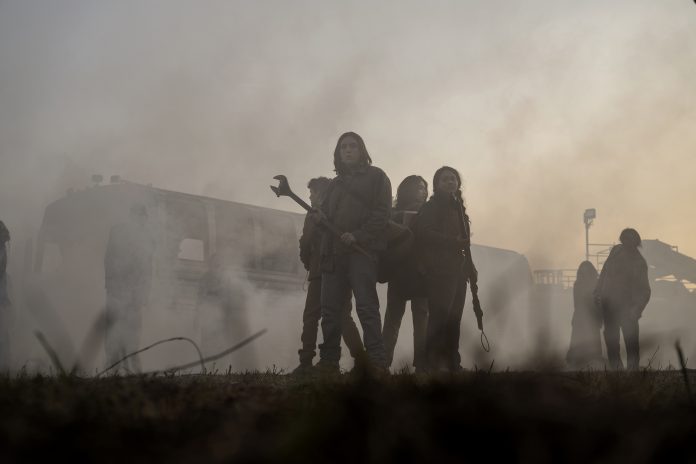 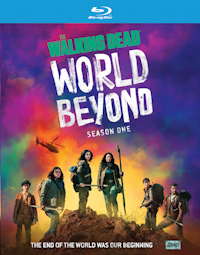 The Walking Dead: World Beyond is a two season limited series spin-off based on and in the world of The Walking Dead. The latest addition to the popular franchise is set ten years after the original apocalyptic event that sent the world into chaos and brought the plague of zombie, AKA “walkers,” now called “empties” by the younger generation that this season is focused on.

Squarely aimed at Gen Z, this series focuses on a group of teenagers who have grown up in this post-apocalyptic world in the confines of one of the closed-off and relatively safe communities that have begun to spring up. Two sisters, Hope Bennett (Alexa Mansour) and Iris Bennett (Aliyah Royale) whose scientist father has been away, supposedly working for a highly secretive and powerful pseudo-State set out beyond the boundaries of their community to go find their dad, their friends Elton, a brainy kid into science who lost both of his parents on “the night the sky fell,” and Silas (Hal Cumpston), a bulky and awkward boy who everyone believes to be violent because of an incident from his past with his parents. Two older members of the community set out behind them to either bring them back or keep them safe, former Marine Huck (Annet Mahendru) and Felix (Nico Tortorella).

This series tries to tread a different path from the main series, but in the end, it does basically follow the same outline of giving us a character study, often veering off to follow subplots of one or two characters or others and giving us their stories through flashbacks as they traverse the dangerous empties filled landscape.

Unfortunately, it also moves at such a snail’s pace, it doesn’t become interesting and throw in some interesting twists, machinations, and action sequences until we get to nearly episode 7 – there are only ten episodes in the season.

Purchase The Walking Dead: World Beyond, Season One on Amazon.com

While the 1.78:1 AVC 1080p encodement for this series looks satisfying and certainly better than streaming quality, it doesn’t rise to reference levels. The encodement averages 24Mbps and often there is a subtle but noticeable flicker, especially in the darker scenes. Some very subtle banding can also be seen sometimes around points of light in dark rooms.

The Walking Dead: World Beyond comes with an English DTS-HD Master Audio 5.1 audio mix on Blu-ray. The mix is somewhat stagnant and there is very deep low-end extension, but there are some good subtle atmospherics that occupy the channels like rainfall, the sounds of “empties” growling in the distance, and the score. Dialogue is clean and full.

There are only three brief EPK-style featurettes (all in 1080p) included on the third disc. The titles are self-explanatory, and they each offer some interviews with the cast and crew.

With this series The Walking Dead franchise makes a play for the Zoomer generation to keep the money train rolling, but unfortunately it seems they have done little more than slide in young actors into a barely worth watching series that never takes off.

Purchase The Walking Dead: World Beyond on Amazon.com

Load more
The Walking Dead: World Beyond -- Season 1 (Blu-ray Review)Ten years after the zombie apocalypse, a group of teenagers who are part of the first generation to grow up during the apocalypse, including two sisters and two of their friends, leave their sheltered confines to go on a quest through the dangerous terrain.