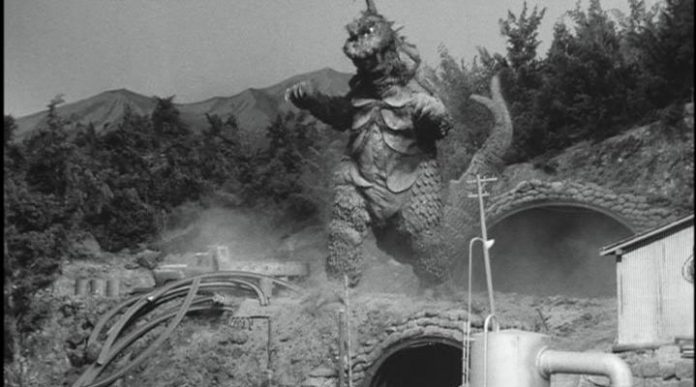 Launched from the mind of the co-creator of the iconic Toho Studios movie monsters Godzilla, Rodan and Mothra special effects director Tsuburaya Eiji, Ultra Q is the first of the Ultra series from Tsuburaya’s own Tsuburaya Productions. The 28-episode kaiju series which ran on the Tokyo Broadcasting Sytem (TBS) from January 2 to July 3, 1966, with the final episode being preempted until December 14, 1967 was up to that point the most expensive Japanese television production until the following, even more popular Ultraman series.

The episodes for Ultra Q are all pretty much self-contained adventures, action-filled kaiju that despite their obvious camp and visual effects that have never passed as anything other than guys in suits rampaging mini-sets, are pure escapist fun; the same kind of fun that make the Godzilla films such long-running successes.

Fans of kaiju movies and shows who’ve never seen the series – and I find it hard to believe such a person exists – are sure to enjoy these 28, quick episodes.

Mill Creek Entertainment provides the complete, original Japanese broadcast edits – fully remastered and restored in HD – of the series in a 1.33:1 AVC 1080p encodement. Sure, there are still some visible nicks here and there, but the series’ black and white imagery basically looks great for a Japanese TV broadcast from the 1960s.

Ultra Q is brought to Blu-ray with a Japanese DTS-HD Master Audio 2.0 stereo – that’s right, I said stereo mix. It’s not really clear that the mix is stereo at first since most of the sound including the dialogue and many effects are clearly centered, but action sequences bring explosions and splashes that clearly spread across the stereo field. The sound is clear, punchy, and dynamic and with little clipping.

There are no on-disc extras, but the included booklet with episode guide and explanation of the monsters and various technologies that appear in the series is a cool inclusion. The digital copy is one I normally love to see, but Mill Creek’s redemption code limits you to using their own movieSpree service, which is available across all the major platforms (tvOs/iOS, Roku, Play Store, etc.), but only carries Mill Creek licensed properties.

A fantastic release of this kaiju TV series classic from the 1960s that has never looked or sounded better released by Mill Creek Entertainment. Genre fans, anyone who grew up watching this or came to these shows later in life – grab it up now.

Ultra Q: The Complete Series is out on Blu-ray and Steelbook October 15, 2019 from Mill Creek Entertainment