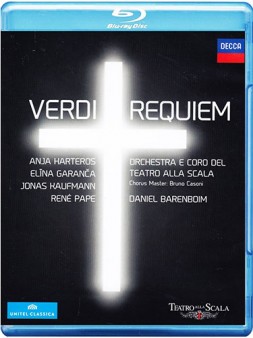 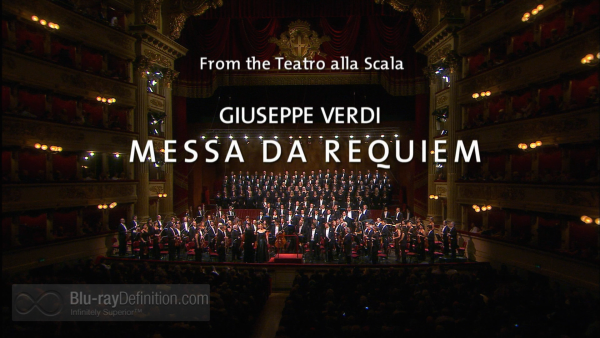 2013 was a big year for Giuseppe Verdi, marking the bicentenary of his birth. So, of course, we expected a flood of Verdi recordings and this we most definitely received. While most of the videos issued this year were various performances of Il Maestro’s operas, we did get three different performances of his major liturgical work, Messa Da Requiem (Requiem Mass). Written in 1874 as a memorial to the great Italian poet Alessandro Manzoni, it has been performance staple ever since. 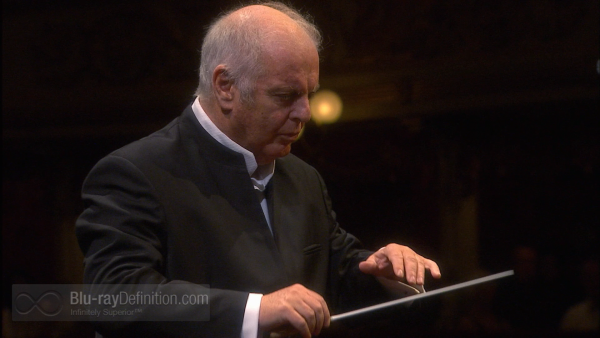 The work has seven major sections with a wide contrast of dynamics and moods, beginning with the introspective almost hushed Requiem aeternam, followed later by the fire-and-brimstone Dies Irae, and concluding with an otherworldly Libera Me Domine with its vocal fugue. The Requiem has plenty of highlights for chorus and vocal and instrumental soloists. 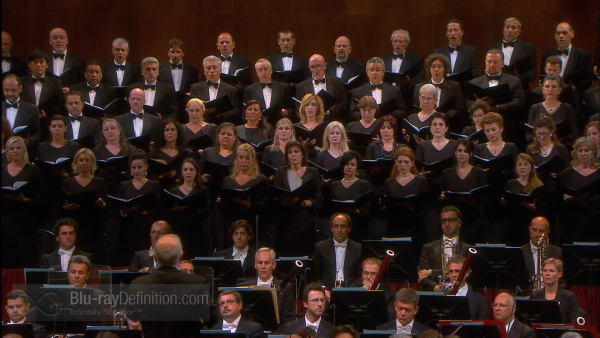 This 2012 performance, recorded at Milan’s famed Teatro alla Scala, home to many Verdi operas, features an all-star cast headed by soprano Anja Harteros, mezzo-soprano, Elina Garanca, tenor Jonas Kaufmann, and bass Rene Pape.  World-renowned maestro Daniel Barenboim leads the La Scala Orchestra and Chorus. Given this powerhouse lineup, you would expect a spectacular outing and this we certainly get. Despite some relatively leisurely tempi, Barenboim gets some great playing from his orchestral forces and chorus, milking every last drop of drama (and there is plenty of it) in this piece. I was rather surprised at the somewhat restrained response of the audience at the Requiem’s conclusion not only because it is such a towering work but because of the performances turned in by the soloists. 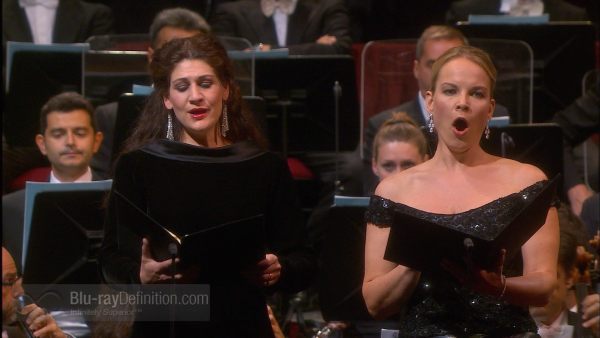 Here is the bad news. Although many of the close-ups are razor-sharp, there is considerable motion artifact, particularly noticeable when Barenboim moves his hands. In addition, the camera transitions produce periodic blurring. Colors are excellent and overall video direction keeps viewers engaged. 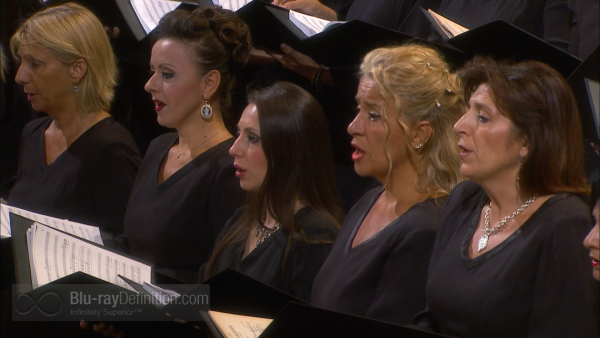 The big sound picture of this piece comes across quite well in the DTS-HD Master Audio 5.1 soundtrack and only slightly less so in the two-channel alternative. In the quieter moments, the voices are clear and beautifully reproduced, as in the Recordare, a heart-rending duet between the women. However, in the fortissimo sections, the soloists are occasionally overwhelmed despite the fact that they are standing in front of the orchestra. 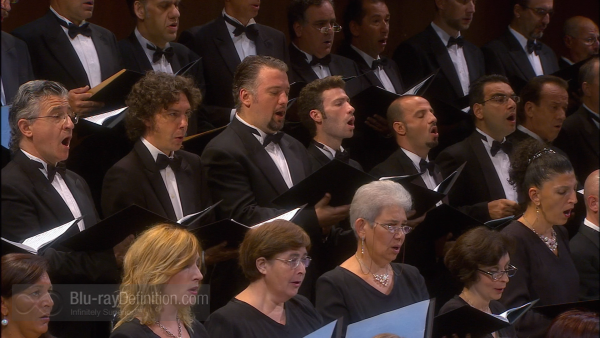 There is a program booklet with playlist, and Andrew Stewart’s excellent background essay on this work and its composer. 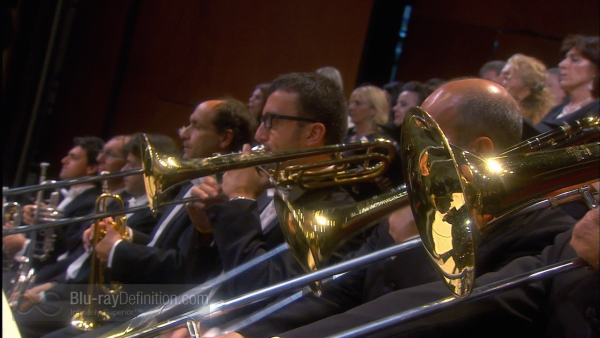 This performance offers countless magic moments but I would defy any viewer not to be moved by Kaufmann’s thrilling rendition of my (and of many others’) favorite moment, the Ingemisco. There have been many standard definition recordings of this work but I would have to give the top spot, regardless of format, to the von Karajan-led performance from this same venue with a vocal lineup of no less than Leontyne Price, Fiorenza Cossotto, Luciano Pavarotti, and Nicolai Ghiaurov. Granted its visuals are dated and its soundtrack only LPCM stereo, this is the one that I will take to my desert island. Visual disappointments notwithstanding, the current release goes to the top of my Blu-ray short list based on the considerable strength of its vocalism, with three of the four soloists being acknowledged as the world leaders in their respective voice ranges. 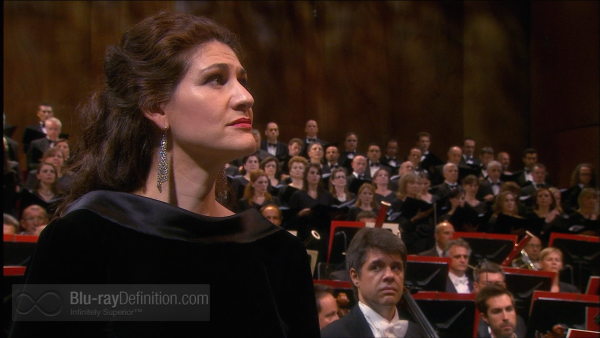 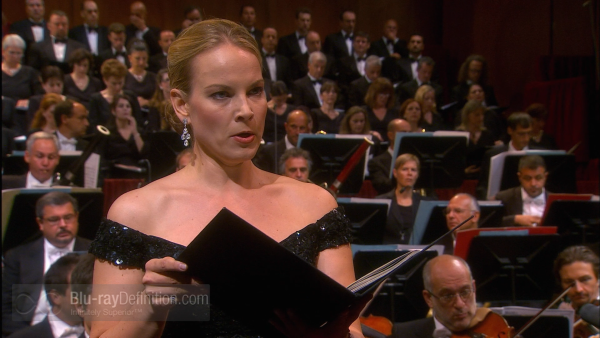 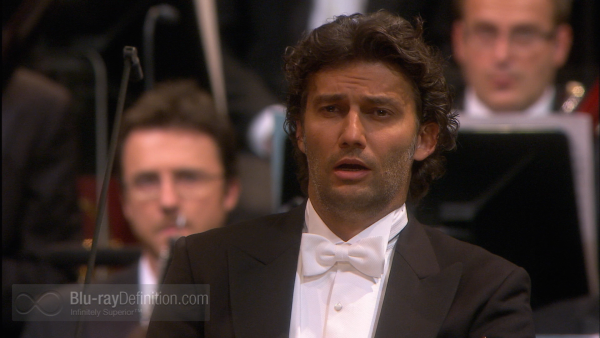 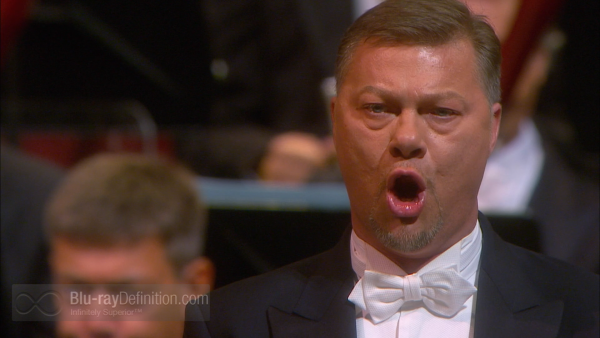