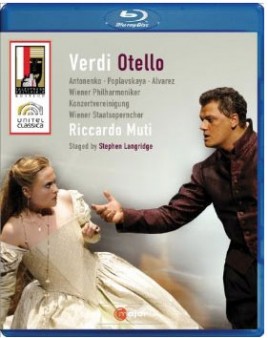 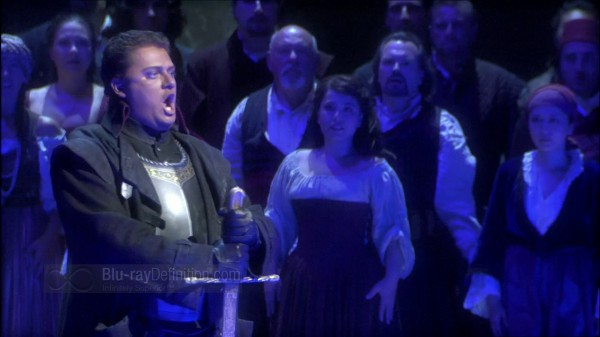 Act I. Otello, the Venetian governor of Cyprus, is joyfully greeted at the island port after victory over the Turks and surviving a storm at sea. Only Roderigo, who is secretly in love with Otello’s wife Desdemona, and Jago, who resents Otello for having promoted Cassio to lieutenant, do not take part. Jago makes Cassio drunk and has Roderigo provoke him into a fight with Montano, the previous governor of Cyprus. Alerted by the clamour, Otello appears and demotes Cassio. Alone, Otello and Desdemona revel in fond memories and assure each other of their love.

Act II. Jago manages to rouse Otello’s doubts about Desdemona’s fidelity. When she asks for Cassio to be forgiven, Otello takes this as an indictment of her secret attachment. To postpone to responding to her request, he pretends to have a headache. Desdemona tries to cool his forehead with a handkerchief, but he throws it dismissively to the ground. Jago takes the handkerchief in order to conceal it later on in Cassio’s home as bogus evidence. He then tells Otello that he has seen Cassio holding this very handkerchief, and the raging Otello swears to have his vengeance.

Act III. Otello’s distrust grows when Desdemona is unable to produce the handkerchief when asked. Concealed, he eavesdrops on a conversation between Jago and Cassio in which Jago manages to convey the impression that Cassio is waxing lyrical over his love affair with Desdemona. When an unsuspecting Cassio finally produces the handkerchief that he has found in his home, Otello sees his suspicions confirmed and determines to kill Desdemona that very night. Jago, together with Roderigo, will meanwhile murder Cassio. While the governor’s household assembles to greet a delegation from Venice, Otello can barely control his anger any longer.  Finally he publicly slanders his wife, before collapsing unconscious.

Act IV. Desdemona is plagued by dark forebodings. After she has said her prayers for the night, she goes to bed. Shortly afterwards Otello wakes his sleeping wife. Deaf to her protestations of innocence, he strangles her to death. Desdemona’s lady-in-waiting bursts in with the news that Roderigo has been killed by Cassio in a duel, and that before dying he revealed the plot with Jago. Otello realizes his blindness too late and stabs himself beside Desdemona’s body.

There were high expectations to be met at the 2008 Salzburg Festival when Riccardo Muti and the Wiener Philharmoniker staged their production of Verdi’s Otello. It had been the first production of Verdi’s last tragic opera at the festival since Karajan and the orchestra performed the piece in 1970.

Concertgoers must not have been disappointed then as Stephen Langridge’s staging combined with Muti’s superb command over the material combine for what is one of the most moving performances of Otello one can experience. Langridge’s set is more like a play than it like an opera and Muti perfectly balances the music with vocalists whilst displaying a keen instinct for Verdi’s orchestral language.

Opera, however, is more than just the sum of its orchestra and its staging. One might even say that it lives and dies by the singers that step into the roles of its protagonists. Newcomer Aleksandrs Antonenko is a marvelous Otello. Playing the role for the first time, he has a gentle quality to his voice and the right balance of legato that evokes a sympathetic and emotional Moor. Marina Polovskaya is a beautiful Desdemona. Her voice imparts an equally matronly and graceful charm. She is powerful and delicate at once. Together, they blend into an exquisite mating of sound. Their duet at the end of Act I, “Gia, nella notte densa” is enough to move someone to tears. 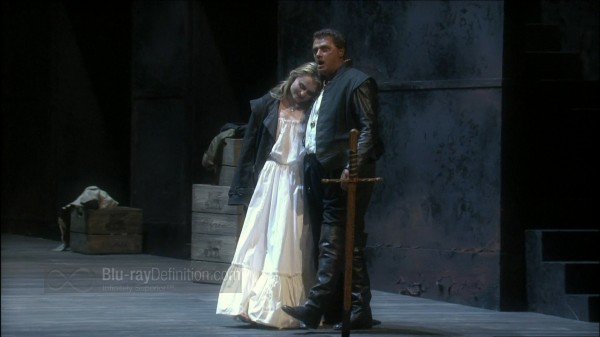 An original high definition recording, Otello arrives with a 1.78:1 1080i/60 AVC/MPEG-4 encoding on Blu-ray from Unitel Classica. The quality is inconsistent for this release. There is some very obvious blocking and posterization in areas and a high level of video noise in the low-light scenes. Detail is soft, particularly in backgrounds, yet in foreground when lighting is bright, the image can look quite splendid and sharp. There is also some noticeable distortion around the edges of the screen. People with displays that have some amount of overscan might not notice this. 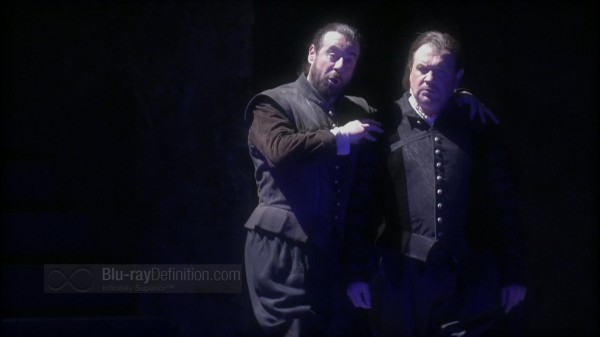 Both DTS-HD Master Audio 5.1 and PCM 2.0 mixes offer enjoyable listening experiences. Strings are quite smooth, vocals are clear, and there is a wide dynamic range. Things do tend to sound just a bit cluttered during full choruses and tutti, but otherwise, the instrumental separation across the front is very strong. The 5.1 mix employs a good balance of ambience in the surrounds and does not overdo the LFE. My preference is for the surround mix, but those who prefer a 2.0 mix will not be disappointed by the depth of field, good stereo separation and lively sound that it provides. 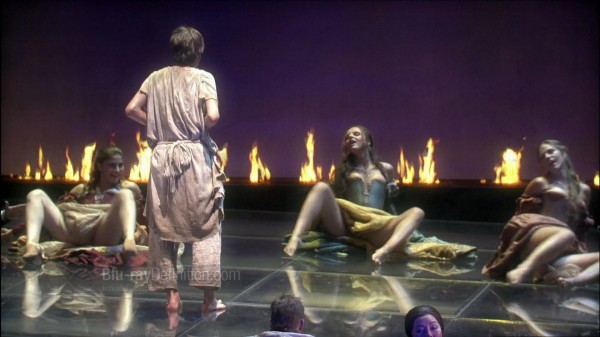 There’s not much here other than an interesting conversation with the musicians and stage director about this production of Otello. 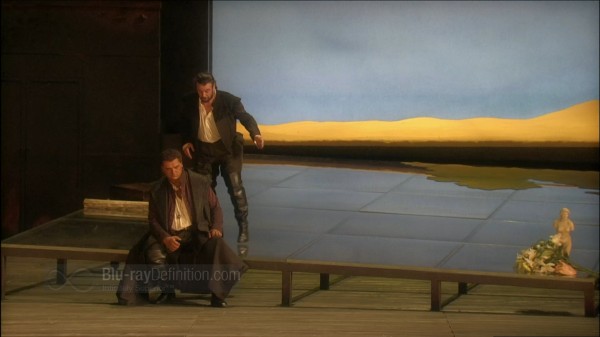 Verdi and his librettist Arrigo Boito did not have much work to do to make William Shakespeare’s story into a heart wrenching tragic opera, but with the wrong music or in the hands of the wrong musicians and it can certainly be more disastrous than tragic. Thankfully, Muti and company are more than up to the task for Verdi’s moving version of Shakespeare’s moor. 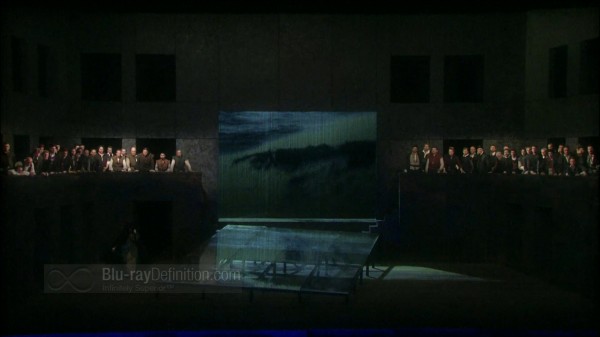 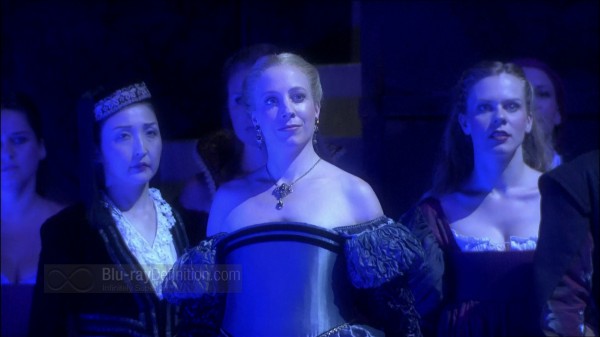 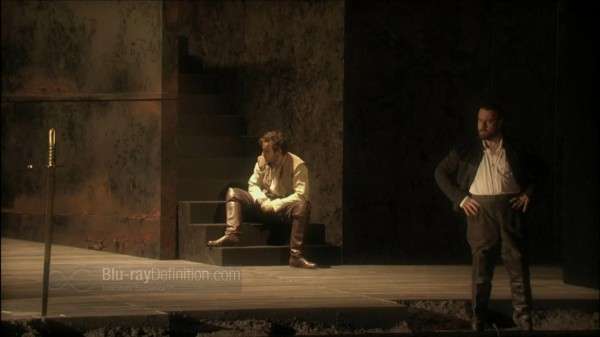 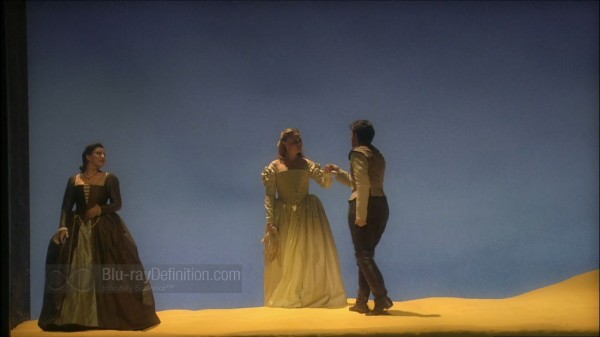 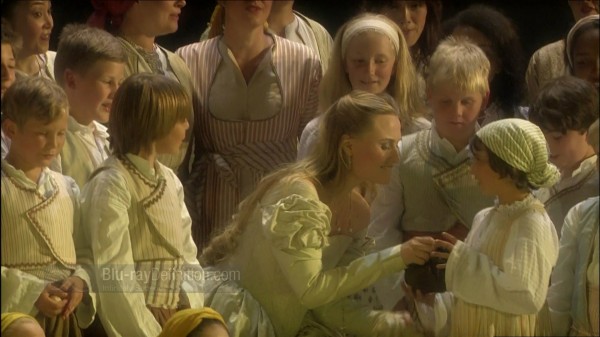 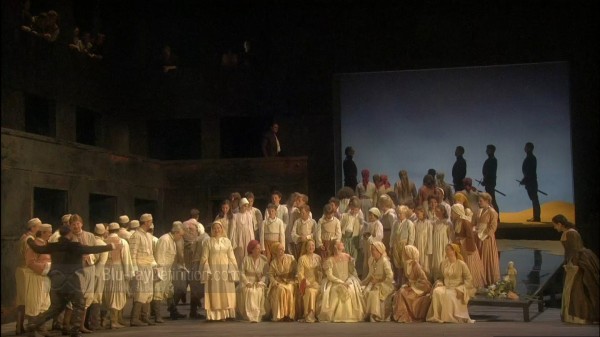 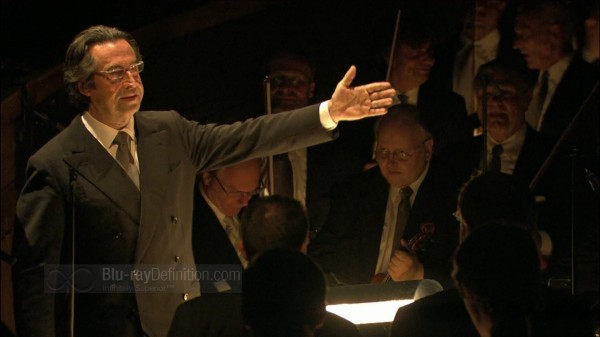 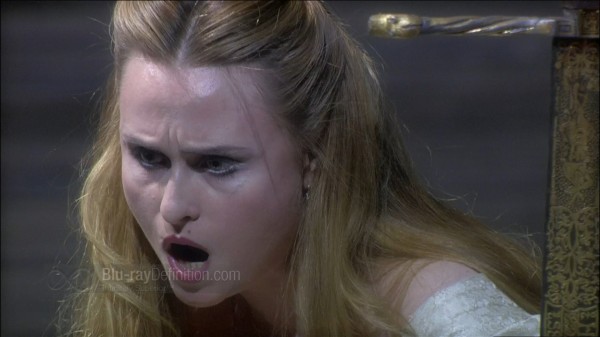 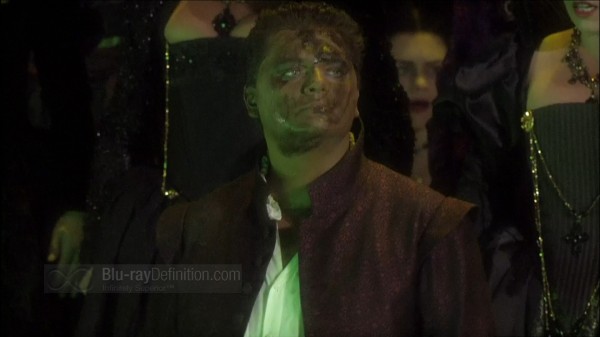