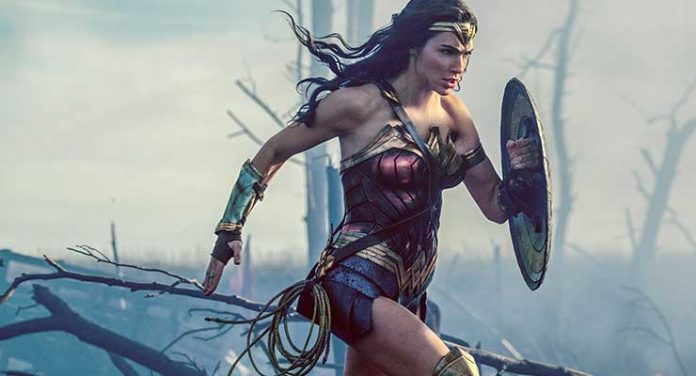 The DC Extended Universe films have been occupied by not only male dominated superheroes from their comic books, but also a series of disappointments. Man of Steel, Batman v Superman, and Suicide Squad failed to live up to the hype and left the comic book fans and theatergoers both disappointed and looking for a film from he franchise to rescue it. Wonder Woman’s appearance (Gal Gadot) in Batman vs Superman, was very well received, so the cycle of hype and anticipation began again for the heroine’s first big screen feature-length solo debut to be the one to pull the Extended Universe out from a bottomless pit of failure. Wonder Woman arrived ahead of the Justice League movie, so a lot was riding on it to keep the franchise alive. As a superhero action movie, it delivers far better than its predecessors by sticking to the basics, but also by moving the majority of the story into what is basically a film-long flashback set in the 1910s during World War I and on the mythical island of Themyscira where Diana got her start, The film acts as an origin story for the DC heroine and most of the basic tenants of her story remain the same. Diana grows up on the isolated island inhabited by the immortal women known as Amazons. The daughter of the Amazon queen, Hippolyta (Connie Nielsen), Diana is trained as a warrior by Antiope (Robin Wright). One day Thermyscira’s peace is interrupted when a male pilot, Steve Trevor (Chris Pine, Star Trek movies) from the outside world crash-lands and is quickly followed by a group of German soldiers. Diana saves Steve Trevor and helps her Amazon sisters fight off the Germans. Steve tells Diana and the Amazons of a war engulfing the world, and Diana feels it a duty to follow him back to the ‘world of men’ to help stop it.

The two journey back to World War I Europe where Diana is not just out-of-place because of her centuries of isolation on Themyscira and her ancient warrior princess garb, but also the culture shock of Edwardian era European mores concerning women – she’s a strong woman in a male-dominated world. Unfortunately this also provides much of the weakest material of the film, setting up a cliché romance between Diana and Steve Trevor who seems to be more humoring Diana and her warnings about the god of war Aries and her now seemingly quirky habits than he is honestly supporting her, though he does eventually come around.

The film works it way toward the usual showdown between good versus evil in an epic showdown that acts as the dénouement, and like the first Captain America movie, having this set in the past offers Wonder Woman the opportunity to set itself apart from most superhero movies that are all set in the same pseudo-present/alternate universe that requires much more effort to suspend disbelief. Here we get an interesting look at a heroine trying to use her abilities to end World War I and the thought-provoking discussions all of that entails.

Gal Gadot is wonderfully cast as Wonder Woman a character who in the minds of many is indelibly linked with Lynda Carter and her portrayal of the iconic female comic book character in the 1970s TV series. Gadot is a picture of strength, intelligence and beauty that character has always been associated with. Chris Pine is also perfect as the swashbuckling, heroic American pilot Steve Trevor. 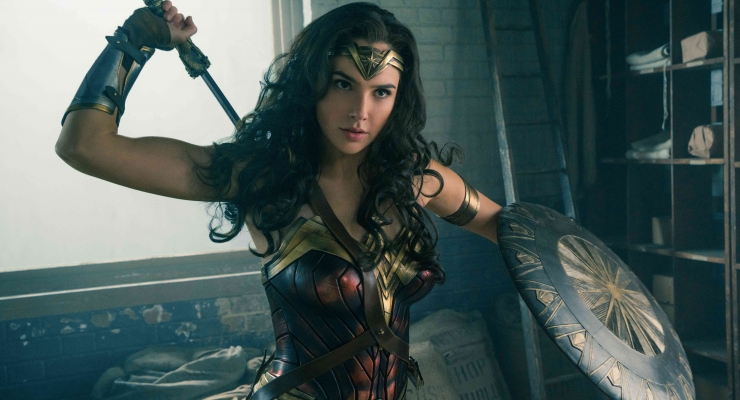 This film was shot on the Arriflex 235, Arriflex 435, and Panavision Panaflex Millennium XL2 cameras with Panavision Primo Lenses on Super 35 film. Certain scenes were also shot on the Arri Alexa 65 with Panavision Sphero 65 Lenses in 6.5K resolution. A 2K DI was used in post processing and the film was mastered in Dolby Vision. For the 4K Ultra HD, the HEVC 2160p (4K) encodement is up-scaled from the 2K master and mastered in the HDR10 HDR format.

The 4K resolution really brings out the texture of the Super 35 film source, which looks very organic, and videophiles may appreciate that, but some grain haters may dislike the grittier appearance. The film also has a somewhat desaturated look, especially once it moves into the World War I era world, so colors, despite the wider color gamut, don’t exactly ‘pop,’ but that said, the HDR does offer far greater nuance in flames and shadows, and the vivid glow of the golden lasso is one of the standout visual effects of the film. In comparison, the Blu-ray doesn’t ‘pop’ as brightly when  the lasso lights up and the golden color looks less sun-like. The grain, while still present, looks a bit coarser, but not as crisp on the Blu-ray.

Warner Bros. brings Wonder Woman to 4K Ultra HD with a rollicking Dolby ATMOS mix that is beautifully balanced, thunderously extended in the low-end range, and makes full use of the overhead channels for both atmospherics and discrete effects. The dialogue is very full and upfront, especially during the climactic showdown between Wonder Woman and Aries.

An excellent slate of on-disc extras is included that provides many behind-the-scenes “making of” featurettes including discussions with the director and more.

This film helps to resuscitate the DC Extended Cinematic Universe and keep it on life support with the first solo feature film for the iconic female comic book heroine. The production is tight, the casting is spot on, and Gal Gadot wows in the title role. The 4K Ultra HD Blu-ray Disc is a solid release, even not as stunning as some other recent releases.