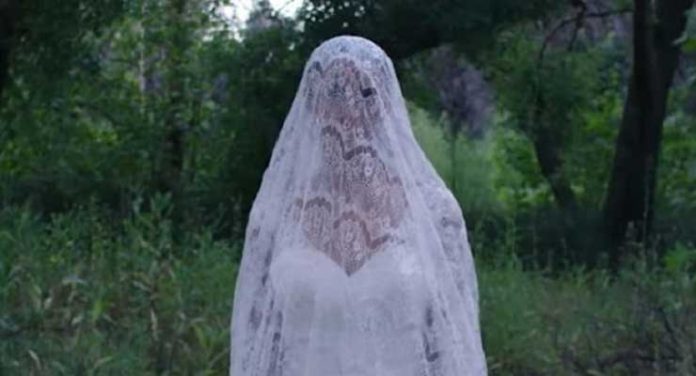 Into the Dark: Pure is the penultimate chapter of the first season of this Blumhouse Productions/Hulu Studio collaboration. In spite of its apparently innocuous title, this film turns out to be a dark study of what happens during an annual fathers-and-daughters weekend.  Kyle (Jim Klock) has brought Jo (McKaley Miller) and Shay (Jahkara Smith), his daughters borne by two different women, to Pastor Seth’s (Scott Porter) religious retreat where they will pledge their vows of chastity until marriage. Of course, it would not be a typical young adult weekend without a little hanky-panky, as the half-sisters team join roommates Lacey (Ciara Bravo), the pastor’s daughter, and diet-obsessed Kellyann (Annalisa Cochrane) for some “after-hours” action with Jo’s boyfriend Jack (Jose Velasquez) and his buddies. Gabe (T.C. Carter), one of Jack’s friends, gets chummy with Shay just before Jo conducts a ritual to call up the demon Lilith, considered by religious mystics to be Adam’s first wife. When this experiment apparently fails, the four women sneak back into their cabin.

Jo rants about her father’s manipulation of their lives while Shay starts to have disturbing visions of the redheaded Lilith (Tara Parker). Later, Kyle reprimands Shay for ditching the afternoon’s small group sessions to go for an “innocent” swim with Jake. Kyle and Pastor Seth take Jo to “The Box” for sleeping with Jack, and, as the evening of the big “Purity Ball” dance approaches, there are plenty of hints that Shay might become the new vessel for Lilith and that the other young women in attendance might get the big surprise of their lives.

In many respects, this is the best installment to date of the Into The Dark franchise. Unlike its predecessors, most of the dramatic punches are pulled until the very end making what ultimately transpires quite a literal and figurative jolt. Writer/director Hannah Macpherson has created a script that can readily stand on its own with relatively little of the blood and gore that has been the hallmark of most of the previous ITD segments. The four young actresses who share the principal billing provide credible renditions of conflicted daughters whose overbearing fathers (well portrayed by Klock, Porter, and Jonathan Chase) have exerted far too much influence on their behavior. We also get an insider’s view of a cult ceremony and it is no accident that the pastor in charge bears the name of Adam and Eve’s third son. As the sun is beginning to set on the era of rampant male chauvinism, this is a well-crafted cautionary tale about determined young women who are no longer willing to abide the demeaning behavior of their male counterparts.

Hulu Original Into The Dark: Pure is streaming now on Hulu