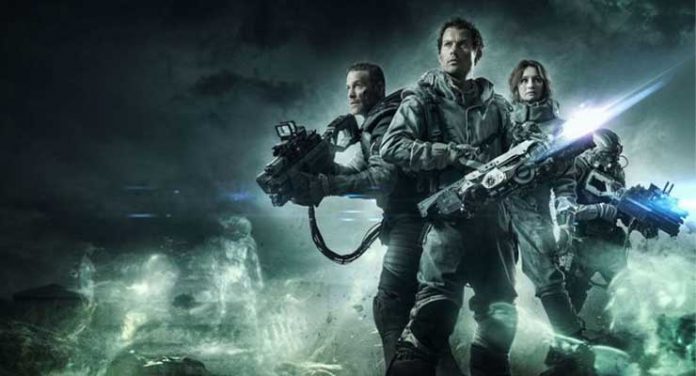 Before we get three minutes into Spectral, there is evidence of an unseen force operating in a city devastated by war. Dr. Mark Clyne (James Badge Dale, The Walk), a Defense Advanced Research Projects Agency (DARPA) scientist has gone out to an old testing site and recovered a capsule containing a substance that destroys tissue by radically changing the temperature of the target (spoiler alert: this physical principle will become important later). Dr. Clyne is suddenly sent to Moldava where an insurgency is in progress. General Orland (Bruce Greenwood, Good Kill) shows the doctor some visuals of an unidentified anomaly captured by hyperspectral imaging goggles that Clyne had originally developed.

Working along with CIA officer Fran Madison (Emily Mortimer, Shutter Island), Dr. Clyne sees videos of an apparition that freezes the internal organs of its victims. Military intelligence suggests that this is merely an advanced form of electronic camouflage or “cloaking technology” that is being used by troops loyal to the insurgency. Clyne and Madison are sent into the field to get more evidence as they join Delta Special Forces members including Major Sessions (Max Martini, Fifty Shades of Grey). 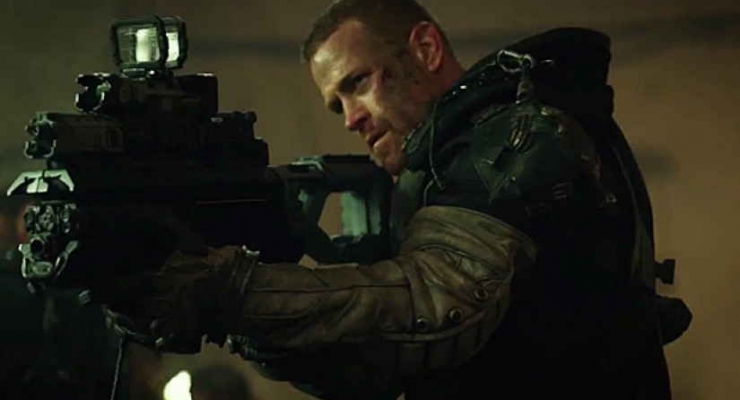 The Delta Force operatives are sent to extract Utah company members trapped in an abandoned building in an insurgent-controlled zone but find only Sergeant Comstock (Ryan Robbins, Falling Skies). An apparition proceeds to wipe out most of the special ops unit and the situation gets even worse when their armored vehicles are destroyed by land mines. The survivors escape to a deserted factory building where they find one more Utah member, radio operator Sgt. Chen (Louis Ozawa Changchien). The group finds two small children in hiding who reveal that the apparitions or aratari can be temporarily thwarted by exposure to iron filings. However, thwarting them is one thing and defeating them is quite another. In an against-all-odds thriller, Spectral races through a series of unlikely events to its shocking conclusion.

Director Nic Mathieu made his feature length film debut in Spectral, best described as Blackhawk Down meets Pacific Rim. The crack team of writers Ian Fried (Singularity), John Gatins (Real Steel), and George Nolfi (The Adjustment Bureau)has combined to produce one thrilling military sci-fi film that builds its tension by literal leaps and bounds. Harnessing innovative weaponry and seat-of-the-pants tactics against an unconventional enemy is no longer a novel plot device but Spectral uses it as well as any film of this genre. With a team of more than one hundred working on visual and special effects, we get CGIs galore that are absolutely spectacular. Kudos also go to cinematographer Bojan Bazelli whose cameras produce one stunning vista after another from location filming in Hungary and Slovakia. To complete the picture, we get an excellent cast of characters that effectively contrast military tough guys with an enterprising scientist. An entertaining sci-fi thriller that makes an hour and a half absolutely fly by.

Spectral is currently available for steaming on Netflix.