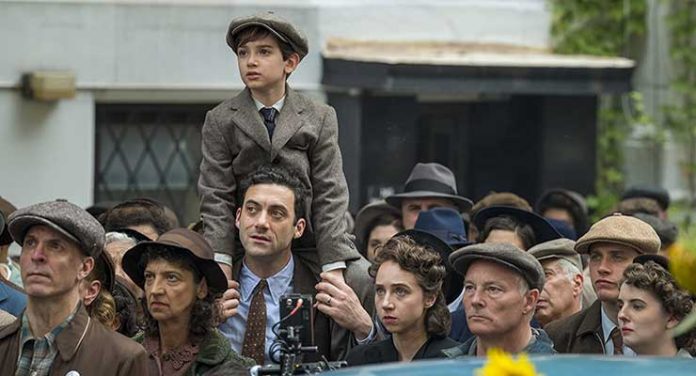 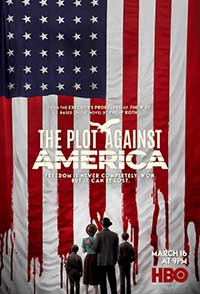 HBO’s original series, The Plot Against America, will sound a familiar chord to fans of Amazon Prime’s The Man in the High Castle series in which a Nazi-occupied America threatened all of the country’s Jewish population. David Simon and Ed Burns have rendered a relatively faithful adaptation of Philip Roth’s unsettling novel of an alternative American history that follows President Franklin Delano Roosevelt’s defeat in the 1940 election by Charles Lindbergh, famed aviator and anti-war candidate.

The six-episode series focuses on the Levins, a middle-class Jewish family living modestly in Newark, New Jersey: Herman (Morgan Spector), his wife Bess (Zoe Kazan), sons Sandy (Caleb Malis) and Philip (Azhy Robertson), their orphaned nephew Alvin (Anthony Boyle), and Bess’s older sister Evelyn (Winona Ryder). Herman works as a life insurance salesman and is trying to save enough money to buy a house in a better neighborhood. Bess is a devoted wife and mother, Sandy is a talented young artist and Philip, an avid stamp collector.  Evelyn, a lonely spinster, cares for their aging mother and falls under the spell of charming Southerner Lionel Bengelsdorf (John Turturro), a rabbi and Lindbergh devotee.

Alvin is disgusted by Lindbergh’s campaign promise to avoid war with Germany while Jews in Europe are being persecuted by the Nazis. He enlists in the Canadian Army and loses his right leg in combat. Rabbi Bengelsdorf runs a “Just Folks” summer program in the Office of American Absorption that gives Jewish boys a taste of rural (read: gentile) America. Sandy participates and this experience temporarily alienates him from his “ghetto Jew” parents. Anticipating the Lindbergh administration’s targeting of American Jews, a troubled Bess puts her loved ones on a waiting list for emigration to Canada.  There is also growing friction between the Levins, Bengelsdorf, and Evelyn who is now the rabbi’s fianceé and has been filmed dancing with Nazi High Commandant Joachim von Ribbentrop (Orest Ludwig).

It is now 1942 and the Levins, along with the numerous Jewish families, are “invited” to participate in Bengelsdorf’s Just Folks program. The program’s stated objective is to make them more “American,” but the underlying motive is much more sinister. The relocation of Jewish families throughout the country is a thinly veiled first step to emulate the Jewish internment camps that were sprouting up all over Hitler’s Europe. Attacks on Jewish communities and synagogue burnings are on the rise in major American cities and Levins prepare to leave for Canada. An unexpected turn of events may suddenly improve their future prospects but many uncertainties still loom ahead as the final episode concludes. 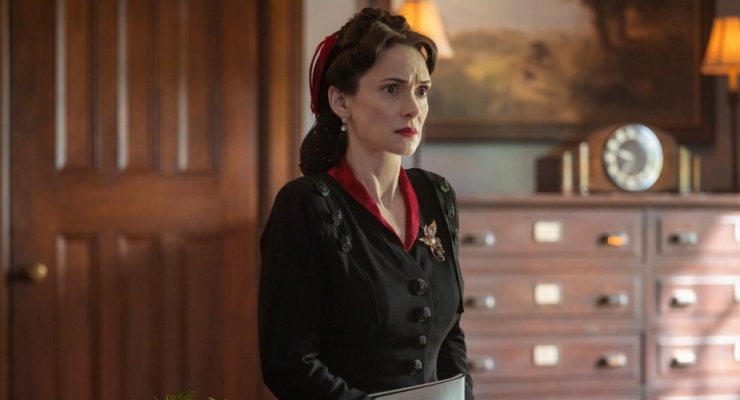 Winona Ryder in The Plot Against America (2020)
7 Photos

The Plot Against America is a tough watch regardless of viewers’ religious affiliations as its stellar cast contends with the potential horrors that may be in store for Jewish Americans. The show’s key relationship is that of sisters Bess and Evelyn, poignantly portrayed by Zoe Kazan and Winona Ryder, vividly demonstrating how families get divided by the Lindbergh administration’s programs, endorsed by a totally misguided rabbi. What is particularly chilling is how rapidly anti-Semitism can spread throughout a free country and how easy it is for normal citizens to allow this to happen. Directors Thomas Schlamme and Minkie Spiro manage the multiple storylines exceedingly well, as the events that are reshaping America’s history begin to unfold. Visually, 1940’s America has been painstakingly recreated down to the last detail by period cars, wardrobes, buildings, and social customs. HBO drops the curtain at a dramatic crux that would surely seem to mandate a second season. Highly recommended.

The Plot Against America is now available for viewing on HBO, HBO Now & HBO Go