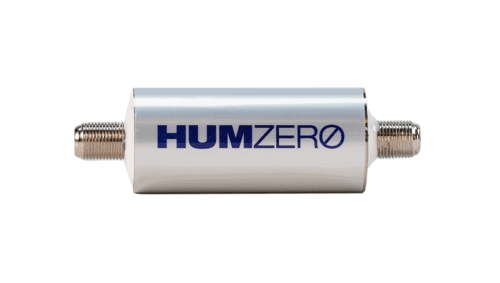 Every so enough, a small, unprepossessing device comes my way and, by virtue of its manufacturer’s claims, makes me wonder how I could have lived without it for so long. In this case, the device is PS Audio’s HumZero, a four-inch-long silver-colored metal cylinder intended to enter an AV system between a cable television line and a cable box.  The rationale for the HumZero is stated in the company literature. “Noise and ground contamination enter our homes and dirty our grounds through CATV connections with the cable company. If your audio system has any connection to your AV system, or a cable internet modem, then you need PS Audio’s HumZero.”

I have such an AV system that feeds a picture from my Xfinity cable box to my Sony Bravia A1E 77” OLED television. The audio is processed by a Theta Casablanca CB-V Music and Cinema Controller. The system’s main electronics consist of a group of Pass Labs amplifiers, XS-150 monoblocs, X-260.8 monoblock, X-150.8 and X-150.5 for the main, center, surround and rear channels respectively, and an Amplifier Technologies, Inc. ATI524NC for the height channels. Speakers are all MartinLogan: CLXs front, ESL Illusion center, EFXs surround, Script-I’s back, Motion AFX height, and Balanced Force 212 subwoofers.  Of note, this 12-channel system can be switched to a 2.1 stereo rig by defeating the pass-through feed from the Casablanca V to the Pass Labs XS line preamplifier. This step allows the preamplifier to select between four stereo inputs: a PS Audio PerfectWave SACD player linked to a PS Audio DirectStream DAC, a Teac Esoteric K-01X SACD player, an Oppo UDP-205 Universal Player and a VPI HW-40 Anniversary turntable with Clearaudio Goldfinger Statement Phono Cartridge.

What Does the HumZero do?

PS Audio states in the HumZero product information that “Using galvanic isolation techniques, PS Audio’s HumZero isolates noisy outside grounds from cleaner inside grounds while maintaining perfect picture quality up to 4K Ultra television signals, or high-resolution streaming audio up to 384kHz/24-bit and beyond.”

A word about galvanic isolation, a design concept I first encountered while reviewing PS Audio’s new SACD player. According to PS Audio, “Galvanic isolation is used where two or more electric circuits must communicate, but their grounds are at different electrical potentials.This ensures the highest levels of noise-free connection and safety as galvanic isolation removes the physical electrical connection.The incoming signal is instead transferred through the air rather than through a physical conductor, thus ensuring 100% isolation, noise-free performance, and complete safety.”

It took me all of two minutes to place the HumZero between my Xfinity cable line and corresponding Xfinity cable box. To make fair comparisons, I chose to use recorded material on the cable box’s DVR so that I could run the same scenes for the before and after comparisons. While there were not night-and-day differences once the HumZero was inserted in the cable line, what I did notice in nearly all the high-definition broadcasts were slight improvements in color depth and details like facial stubble and pores.

From an audio standpoint, I went to lossless material from my Apple 4K TV since all the broadcast audio that I receive is lossy Dolby Digital. Here, particularly with newer films like Netflix’s Cruella and HBO Max’s Mortal Kombat, the Dolby Atmos soundtrack seemed to have better spatial effects and clearer dialogue reproduction.

What was an unexpected blessing that resulted from the insertion of the HumZero into my system was the elimination of a very low-level hum that occurred when I switched the Pass Labs XS line stage to its corresponding Pass Labs XS phono stage in my 2.1 stereo configuration. I had previously tried all kinds of ground wire combinations between the VPI HW-40 turntable and the phono stage, but this issue was completely resolved once the HumZero was installed. Imagine a $49.00 device fixing a long-standing issue with a $43,000.00 preamplifier!

I had always considered my AV system to be well-isolated from noise since each component enters one of five Running Springs Audio power distributors that are plugged into individual 20-ohm dedicated lines. As another example of why you should never become too old to learn new tricks, the PS Audio HumZero showed me how a simple device can make a noticeable and welcome difference in a high-end AV system.  This is a no-brainer recommendation for all AV systems in which a cable box is present regardless of price points and levels of complexity.