Elbow: The Take Off and Landing of Everything High-Resolution Music Download Review 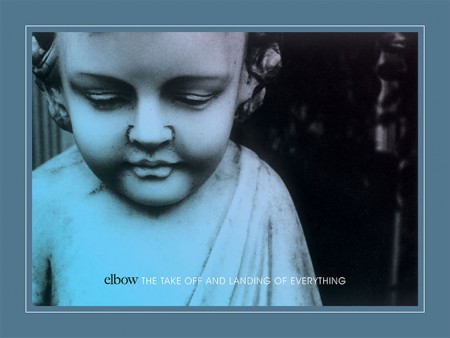 When listening to Elbow for the first time, you might wonder when Peter Gabriel started another project. Don’t be alarmed, it’s actually Guy Garvey, under the Gabriel influence complete with sound-alike vocals. While they haven’t crashed the yellow tape to American audiences, Elbow has a 20-year history and has been a UK scene fixture for over 15 years. The Take Off and Landing of Everything attempts to capitalize on their critically praised previous efforts.

Led by a high-sustained organ and slow eighth notes on a snare, you get your first taste of Garvey’s relaxed but gruff chords on the opening track. “This Blue World” slowly builds to a beautiful chorus that intertwines the sung melody with a unison guitar and keyboard countermelody. “Charge” changes the pace with a steady guitar pulse and also utilizes a grand piano and string orchestra, in addition to the band, to change textures. Three tracks in, and we get the highlight of the record, a two-for one: the in your face “Fly Boy Blue” and constantly moving yet alluring “Lunnete”. Containing instrumental breaks that bring you back to the first time listening to King Crimson’s “21st Century Man” or “Larks Toungue in Aspic”, “Fly Boy Blue” shows the heavy progressive roots of Elbow. It transitions seamlessly into “Lunette”. Propelled by electric bass and drums, Garvey’s words are like a leaf caught in the wind, endlessly floating and rolling. He then dips into harmonies straight from the Peter Gabriel school and nails them on “Real Life (Angel)”. A line from Shakespeare’s Antony and Cleopatra is borrowed for “My Sad Captains”, a sleeper that I’m sure if it weren’t for the 6-minute run time would have been pushed as a single. The concluding song “The Blanket of Night” features sections filled with synthesizer sounds that evokes the image of a young Malcolm McDowell and his three droogs sipping milk.

The Take Off and Landing of Everything was partly recorded at Real World Studios. The band’s arrangements are known for dealing with dynamics and volume and the 96khz/24bit FLAC from HDtracks (also available in ALAC, AIFF, and WAV) really illustrate their intentions. Songs like “Fly Boy Blue/Lunette” and “Honey Sun” are great examples of the addition, subtraction, and layering of parts to achieve this. Garvey’s vocals pushed to the front, as they should be, are your favorite dessert for the ears. The double bass on “The Blanket of Night” is captured naturally not only for the tone of the notes, but the percussive slap of a hand on the fingerboard.

A high-resolution pdf of the insert including cover art, lyrics, and personnel information is included.

If you are a fan of Peter Gabriel, Genesis, or Progressive Rock, this album will end up in your regular rotation. The same goes for fans of more modern British groups like Coldplay. While not a classic album, The Take Off and Landing of Everything, is a solid record with standout selections. The warm and personal nature of Elbow’s arrangements really come through on this high-resolution release currently available at HDtracks.