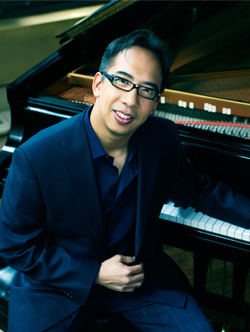 For classical music fans in search of new talent, a name that continually comes to the forefront is that of pianist Joel Fan. Fan has that rare blend of technical expertise and musical curiosity that fuels his continual pursuit of “the road less traveled” repertory. With four albums now under his belt, and numerous live appearances to boot, Joel Fan’s star in the music world is certainly in its ascendance.  Two of his recent albums, World Keys and West of the Sun were Classical Billboard Top Ten entries. I caught up with this very busy artist and had the pleasure of chatting with him at length. As it happens, I discovered that we had a good bit in common: both trained in classical music (although about 45 years ago, I traded in my black clarinet for a black medical bag), and both graduates of the same undergraduate school (Harvard College).

TheaterByte: Tell me about your introduction to the piano and your early development as a classical pianist.

Joel Fan: My parents are true classical music lovers, and our house was always filled with beautiful music – both classical and opera. Pop music was not allowed! In particular, my dad would love to blast his recording collection to wake us up in the morning. He had good taste in pianists– with recordings by Vladimir Horowitz, Glenn Gould, Artur Rubinstein, Murray Perahia, Alfred Brendel, and others who would also become my pianistic idols. I definitely enjoyed performing as a teenager, and had my introductory musical education at the Juilliard Pre-College.

BD:  As a developing musician, who were your inspirations and role models?

JF: So – getting back to my parents -one of my favorite piano recordings is one by Leon Fleisher playing Leon Kirchner’s First Piano Sonata. As it turns out, I would study with both legendary musicians Fleisher and Kirchner– “the two Leons” – both of whom deeply influenced my musical psyche. Emanuel Ax also took me under his wing – for which I’m forever grateful- and I worked on a ton of repertoire with him – particularly the Chopin Concertos and the Funeral March Sonata. I’d always admired Ax’s recordings of these works, and it was wonderful to see the way he thought. Of course, I admired Horowitz and his sheer firepower and electricity as a virtuoso, his dynamic range, and his unparalleled control of timbre, tension, line, and drama. Horowitz’s various recordings of the Rachmaninov Third Concerto particularly entranced me.

BD: In classical music performance, as in real estate, the secret to success is “location, location, location.” How do you go about locating the repertory that will get you noticed and then hired for concerts?

JF: I’ve always been interested in pushing boundaries. An example is the redefinition of what the piano recital means in the 21st century. I’m interested in music that has emotional resonance, logical flow, and its own distinct voice – regardless of era. So I’ll start with my own fascinations, and then I’ll create unique programs that help bring unexpected connections to light.

BD: It is obvious from your recordings that you enjoy “modern” piano works stemming from 20th century composers.  What draws you to this particular genre and what drives your choice of compositions?

JF: I think that my studies with Leon Kirchner were important to my gaining an appreciation for contemporary music and its lineage from its classical antecedents. When dealing with a thorny contemporary work, Leon would say ‘this is just like regular music’ – meaning that it descends from a similar inevitable musical logic that might guide a Beethoven sonata. So because of Kirchner, I feel like I have a particular affinity for the contemporary music of American composers. I think that it’s really awesome that, in an age where most music is played with the help of electronics and speakers, a mechanical device like the piano has such tactility and power to move people.

BD: The life of a concert pianist can be a lonely one. Tell me about your offline interests and pastimes.

JF: I love being a solo pianist. There is something very liberating about being on the road, and discovering new places and venues, and of course all the local dining options. In terms of pastimes, I love driving, running, and the occasional tennis game.

BD: The arch of the development of a classical artist is always going to the next career phase. What is the next phase for you and will we be surprised?

JF: I like to go with the flow and be surprised myself! I am touring with music of Ginastera for his 100th centenary in 2016; and pairing that with Liszt Sonata and Chinese works by Wang Jianzhong. I have been also performing the music of Richard Wagner with my own transcriptions for piano. Finally, I am becoming fascinated again with the variation form: I have always wanted to perform the Rachmaninov Variations on a Theme of Corelli and the Beethoven Diabelli Variations. I am also taking a deep dive into some of the best 20th and 21st century solo piano music – there’s so much of it that deserves to be played more.

BD: Finally, is there a Joel Fan recording that would present the best opportunity to introduce you to new audiences and why this one?

JF: I am excited about my latest recording, Dances for Piano and Orchestra,  that is being released on Reference Recordings. It is a set of piano and orchestral works by composers as diverse as Chopin, Saint-Saens, Pierne (Faure’s teacher), Gottschalk, and others. These works all have a connection to dance forms – for example, Chopin’s Krakowiak is a Polish dance turned into a virtuoso 14-minute romp on the keyboard. I’m looking forward to introducing it!

BD: Thanks for allowing me to spend some time with you. For Joel Fan “fans,” his new album will be available in October 2014.  For those wishing to get the “live” Fan experience, Joel will be concertizing at the following dates and locations:

For more in depth information about Joel Fan’s career, you can visit his web site, https://www.joelfanmusic.com.