Confirming the news Blu-rayDefinition brought you in July (Naxos to Debut Blu-ray Audio Releases with Corigliano’s Circus Maximus), Naxos announced their forthcoming line of Blu-ray Audio releases, the first of which is to be John Corigliano’s Circus Maximus, composed specifically for surround sound, and performed by the University of Texas Wind Ensemble with Jerry Junkin Conducting. The disc will be released September 28th, 2010 and sell at a suggested retail price of $19.99. 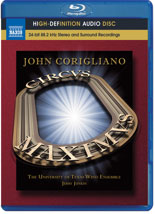 Following the launch of this format, Naxos will have a steady flow of Blu-ray Audio titles.   Planned releases for the immediate future include: