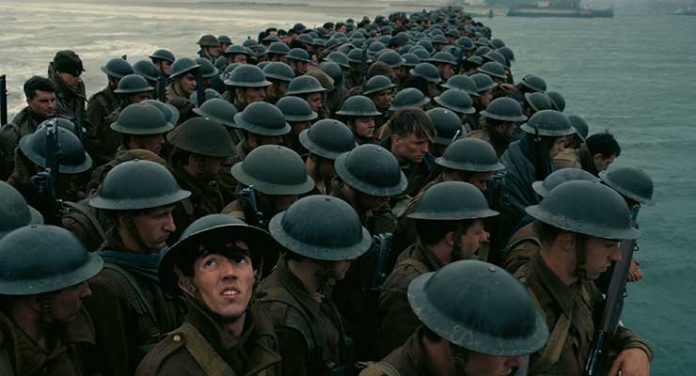 When does a massive military defeat become a massive morale-building victory?  English writer/director Christopher Nolan offers his own answer in the new film Dunkirk that depicts the attempted evacuation of nearly 400,000 British Expeditionary Forces from the French coast between May 28 and June 4, 1940.

From the opening sequences as British soldier Tommy (Fionn Whitehead) eludes German gunfire and makes it to the beach, Dunkirk becomes a film driven by a maximum amount of action and a minimum amount of dialogue. While seemingly endless lines of soldiers await a miraculous rescue, Nolan chooses to focus only on a few characters. In addition to Tommy, there is a French solider (Damien Bonnard) who dons a dead British soldier’s uniform in hopes of being evacuated,  pleasure-boat skipper Mr. Dawson (Mark Rylance) with his crew of sons Peter (Tom Glynn-Carney) and George (Barry Keoghan), British fighter pilot aces Collins (Jack Lowden) and Farrier (Tom Hardy) and, very briefly, British Naval Commander Bolton (Kenneth Branagh).

The Allied campaign to keep France from falling into German hands became an epic failure, and the few remaining French forces attempted to keep the enemy at bay, allowing time for the British forces’ evacuation. The scale of this military operation exceeded anything that had been previously attempted, and the British government was faced with a quandary: should it send an armada of naval vessels with greater capacity but higher vulnerability across the Channel or, as eventually was decided,  send fewer destroyers and an “irregular” fleet of merchant marine ships, fishing boats, yachts and lifeboats?

The film’s three narrative settings shift back and forth in time. The Mole jutting out from the Dunkirk coastline (duration: one week) tracks the gradual progress of the mass evacuation, overseen, from beginning to end, by Commander Bolton. The Sea (duration: one day) portrays the often disastrous fates befalling the rescue vessels.  Mr. Dawson’s yacht, The Moonstone, is the focal point here as it first rescues a shell-shocked soldier (Cillian Murphy) from a wrecked ship, then the airman Collins whose plane was shot down, and finally a seemingly endless stream of troops tossed into the sea after their transport ship was sunk. The Air (one hour) finds two British Spitfire fighter planes in classic “dogfights,” battling the German Luftwaffe bombers and their waning fuel supplies.

The outcome of Dunkirk is well known,  yet Christopher Nolan’s nearly nonstop and quite graphic display of the searing panoply of 20th century warfare deliberately leaves the issue in doubt for some of its main characters for most of the film. Dunkirk has already been compared to Stephen Spielberg’s WW II saga, Saving Private Ryan, but such a comparison misses the point. When SSP’s violent 30-minute D-Day landing scene concludes, that film adopts a more deliberate pace and its often lengthy dialogue digs deeper into how war impacts the psyches of its protagonists. Dunkirk is a complete immersion into the intensity of war provided by the visual perspective of cinematographer Hoyte Van Hoytema’s lenses, and the audio track’s relentless, pounding sounds of bombs and mortar shells. I cannot imagine that most audience members could leave the theater without feeling that they had been absolutely overwhelmed for an hour and a half, exactly Nolan’s expressed goal in his “show not tell” cinematic approach. Near Dunkirk’s finale, one of the characters reads aloud from a newspaper carrying the text of Winston Churchill’s legendary “we shall fight on the beaches” speech. Words, indeed, are an anticlimax to one of the most powerful film events not only of this year but, perhaps, since the première of Private Ryan nearly two decades ago. Highest recommendation.