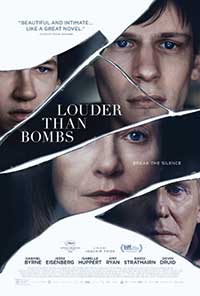 Isabelle Reed (Isabelle Huppert) puts her life at risk every time she goes to photograph the ravages and effects of war in far away places. But she ends up dying in a car crash not too far away from home. But was the crash accidental or on purpose?

by the death of his mother. He’s a loner who spends most of his time free time playing computer games, sullen and never wants to have a conversation with his father. But Gene tries very hard to get Conrad to talk, about anything, but Conrad doesn’t budge. When Jonah pays a visit to help get his mom’s photographs ready for a photo exhibition, leaving behind his wife and new baby, every emotion and grief that they’re all feeling comes to a head. To create even more conflict, Gene is dating Conrad’s teacher. Plus the family have to deal with an upcoming New York Times article about Isabelle that will reveal some ugly truths about her death. It all makes for a very depressing and unemotional film.

Director and co-writer Joachim Trier attempts to tell a story about a family trying to come to terms with the death of the matriarch, a matriarch who was almost never home because of her work. The film revolves around each man’s grief over Isabelle, and how they are trying to overcome it, or not. But Louder Than Bombs is a depressing film that doesn’t really pull the viewer in. There’s lots of imagery and repetitive scenes from different angles that are not necessary, plus a storyline of Jonah having an affair with an old flame that doesn’t serve any purpose. And everything wraps up all too nicely at the end. Louder than Bombs is a bleak and depressing film full of grief and is a film that will be a hard sell at movie theaters, especially heading into the spring/summer season.