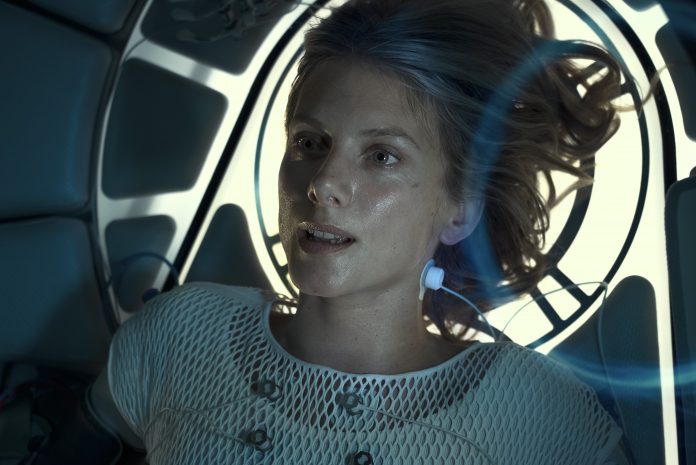 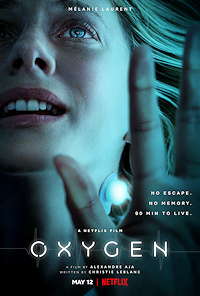 Imagine waking up from hyper-sleep in a cocoon-like total body wrap and, after tearing it partially open, find that you have been strapped to an operating table with tubes in your body and an electrical harness fixed to the top of your head. That is exactly what Mélanie Laurent finds in this French sci-fi film when her character awakes from what turns out to be a 12-year-long slumber in a medical cryogenic chamber with a rapidly diminishing oxygen supply.  As she awakens and begins to remove some of her numerous attachments, it becomes apparent that she has no memories of her life, how she got into the chamber, or even her own identity.

M.I.L.O. (Medical Interface Liaison Operator), an AI supercomputer (Mathieu Amalric), is the only other consistent character in this two-person, okay one person and one machine, story. The woman begins to query M.I.L.O. about where she is and tries to call the police and actually gets a response. But is it a real policeman and will this provide her an escape from her current situation? Gradually, with M.I.L.O.’s continued assistance, she finds out that her real identity is Dr. Elizabeth Hansen, a Nobel prize winning research scientist who performed trailblazing work in cryogenics. Elizabeth or Liz also discovers that she was married to Leo Ferguson (Malik Zidi) and was considering having a child. But as these memories come in fits and starts, the policeman on the line continues to contradict what Liz has seen in her computerized visions. She eventually locates Leo’s contact phone number but when she has M.I.L.O. repeatedly dial it, a woman answers but refuses to talk to her.

The timeclock that punctuates the course of this film shows the gradually decreasing amount of breathable oxygen in the chamber and Liz realizes that she may not be able to save her life unless she can patch together an escape plan before the oxygen supply is entirely gone. While she finally gets the code that will open the chamber, Liz must somehow avoid the automated euthanasia protocol scheduled to be delivered through her IV lines. Finally, she discovers what has really been happening and why she and thousands of other people in identical cryogenic pods have been sent away from Planet Earth.

French writer-director Alexandre Aja (Crawl, The Hills Have Eyes) departs from his usual genre of graphic horror films and has crafted a taut thriller in a claustrophobic setting where the tension rises as the oxygen-clock ticks away the few minutes remaining to a most resourceful heroine. Mélanie Laurent turns in a true tour de force performance as a woman who simply refuses to yield to what seem to be insurmountable odds against her survival. As her character learns more about her past life through visual flashbacks, Laurent traverses the range of emotions from delight (her marriage) to despair (her current situation) and, ultimately, to hope (her future life). Belgian cinematographer Maxime Alexandre has previously worked with Aja on High Tension, Crawl and The Hills Have Eyes. It is obvious that his cameras, working in the limited space of the cryogenic unit, conveyed exactly what Aja wanted and heightened the level of suspense in what was already a very suspenseful storyline. The solitary shot of the huge spacecraft laden with cryogenic pods provides a breathtaking moment as it briefly offsets the confined images within the cryogenic chamber. The Netflix version defaults to dubbed-in English, but Francophiles can swap this for a French language soundtrack if they so desire. Either way, this is one of the most effective thrillers that I have seen in quite a while and will definitely keep viewers on the edges of their seats for its 100-minute running time. Highly recommended.

Oxygen is streaming now on Netflix

Load more
Oxygen (Movie Review)A noted scientist wakes up in a medial cryogenics chamber but cannot remember who she is or why she is there. As the oxygen levels begin to decrease, she must figure out a way to free herself and save her life in this claustrophobic sc-fi thriller from Netflix.