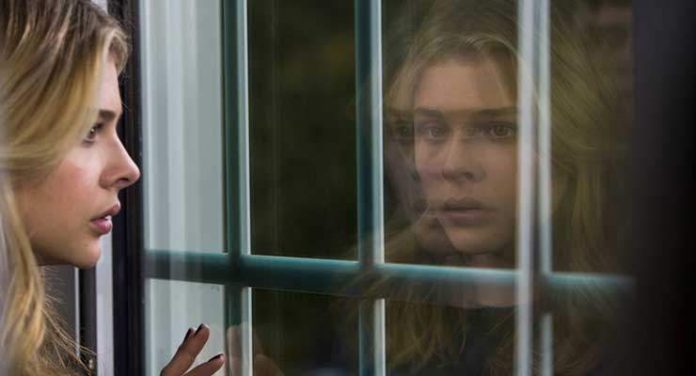 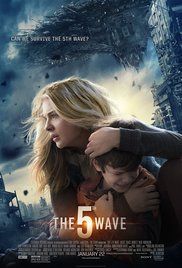 With the immense popularity of film series like The Hunger Games and Divergent, young and powerful female characters attained the forefront of futuristic movies and gripped the attention of huge audiences. The 5th Wave takes its storyline from Rick Yancey’s critically acclaimed novel and stars a vulnerable young woman, unexpectedly thrust into a daunting new world that challenges her coping and survival skills.

Set in Middle America, in this case Dayton, Ohio, The 5th Wave opens with its teenage heroine, Cassiopeia “Cassie” Sullivan (Chloë Grace Moretz) armed with an assault rifle when she finds a a wounded man (Matthew Zuk) in an abandoned gas station. When the man begins to pull a gleaming metal object out of his jacket, she believes it is a weapon  (it is actually a crucifix) and blows him away. The film then

returns to the beginning of Cassie’s story. She is a typical high school student who makes a prophetic  statement “I didn’t know it then but this was last normal day of my life.” A huge spacecraft suddenly appears overhead (shades of Independence Day!). Ten days later, the alien assault or 1st Wave delivers a ginormous electromagnetic pulse knocking out all of Earth’s power. The aliens (who have yet to be seen) become known simply as “the Others.” A second and third wave appear:  tsunamis destroy all of the world’s islands and coastlines followed by an avian influenza pandemic that wipes out most of our planet’s population.

After her mother Lisa (Maggie Siff) succumbs to the flu, Cassie, her little brother Sam (Zachary Arthur), and

their father Oliver (Ron Livingston) find a refugee camp. The 4th Wave arrives in the guise of a  Colonel Vosch’s (Liev Schreiber) military unit. Sam and Cassie get separated during the transport of the children ostensibly to safety but actually to a military base where Vosch and Sergeant Reznik (Maria Bello) are training squads of young warriors.  Cassie searches for Sam but when she is wounded by a sniper, Evan Walker (Alex Roe) takes her to his house to recover. Evan eventually reveals the dark truths about himself, Vosch’s soldiers, and the impending 5th Wave.  Cassie eventually reconnects with Sam and the surviving members of Squad 53 including her former high school heartthrob Ben Parish/Zombie (Nick Robinson) and street-smart kick-ass Ringer (Maika Monroe). Will Cassie and company save the world or is humanity doomed?  Such questions hover over the remainder of this film like the Others’ huge spacecraft did at its beginning.

Brockovich, 28 Days)  adaptation of Yancey’s book. Dialog is terse but after all most of it belongs to adolescents. The 5th Wave is most definitely an action-driven sci-fi thriller just on a smaller scale than The Hunger Games or Divergent. The  plot twists may often seem familiar to those who have seen many save-the-world from-the-aliens movies but with Henry Jackman’s (Captain America: The Winter Soldier) pulsating original score and Enrique Chediak’s (The Maze Runner) exciting cinematography, we get a very compelling watch.

Many post-apocalyptic flicks are heavily laden with CGI special effects.  The 5th Wave has such effects, but these are mostly relegated to the opening minutes,with occasional traces in the fight and alien discovery scenes,  leaving the rest of the movie to rely on its script, direction and acting. On the strength of these three elements, this film surmounts many of its current YA competitors. The youthful cast, particularly the edgy Monroe and the almost too likable Robinson, creates credible teens who must deal with their extraordinary circumstances. Top honors go to the film-carrying performance of Chloë Grace Moretz as she transitions from love-struck texting teenager to battle-hardened fighter. Yancey’s original novel was the first of a trilogy, and based on what The 5th Wave delivered, I am looking forward to the next cinematic installment whenever it appears.