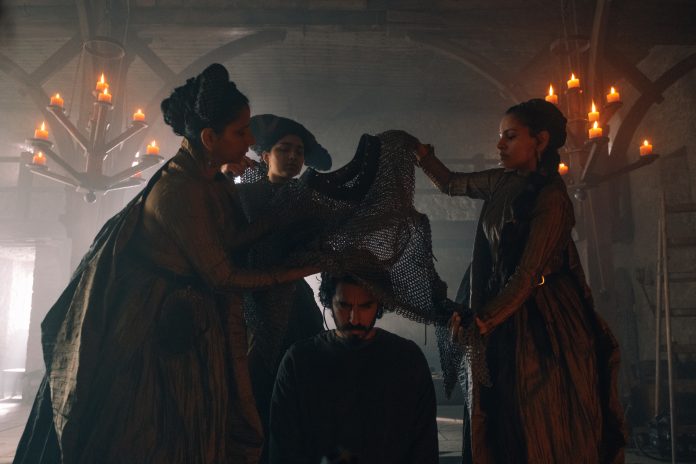 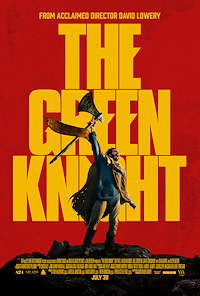 The Green Knight tells the tale of Gawain (Dev Patel), the nephew of King Arthur (Sean Harris). During a meeting at the coveted round table, Arthur shares his lamentations with his people. War is coming, the fields are not producing enough, and the people’s morale is at an all-time low. As if his ears began to sting, a giant “tree man” known as the Green Knight disrupts the meeting and challenges anyone to take him down with a deathblow. If so, they will possess his weapon and be the talk of legends. Even the most stoic knight present in the hall keeps silent until Gawain takes up arms and strikes the Green Knight down only to be shocked that the blow did not kill it. “One year hence.” With that creepy delivery, the film is set on its course.

Who said that a year would take forever to see through? It is almost a year to the day since the duel and Gawain has to make good on his word of returning the challenge to the Green Knight’s doorstep. King Arthur is old and dying and Gawain has yet to show his quality, which is what the underlying message of the film is. Lowery injects all of these variables into the retelling of the famous 14th century poem of the same name. Gawain is shown to be of South Asian descent and the odd man out in a sea of white faces. He’s getting older and isn’t even a knight yet. His mother is a magician and knows that he has a perilous journey ahead of him and makes an “enchanted” girdle that will protect him on his quest.

In a quest that seems to take up many days Gawain will meet up with talking foxes, thieves, murderers, giants, and degenerate royalty from other kingdoms. In these scenes, it’s where we, the audience, really become the proverbial fly on the wall and can feel the weight on Gawain’s shoulders. On the surface, he’s trying to make it to a duel that will most likely get him killed, while trying not to get killed along the way.

David Lowery creates a profound and esoteric film that the marketing wizards over at A24 made seem like the film was going to be this action-packed fantasy film. It’s definitely fantasy, with some embellishments, but is not a fast-moving action film. The Green Knight is David Lowery’s follow up to A Ghost Story, which was released a few years ago. I never got around to watching it but considering the tone of The Green Knight, I may have to just to get a further sense of what Lowery’s films are all about.

The Green Knight was one of my most awaited films pre-pandemic more than a year ago. The first and second trailers were hypnotic alone, I could not wait until the final product was released. I sat there, watched it, and digested the film and it was stellar. It’s one of my favorite films of the year and one of the year’s best. I also went ahead and checked out the source material from the library just to gain more insight into the tale. For those that do get around to catching it in theaters there is a small after credit scene should you wish to stay until after the credits.

I am hoping The Green Knight gets some mad love on home media with a 4K disc release. The film deserves it and also deserves to be seen on the big screen. Highly recommended!