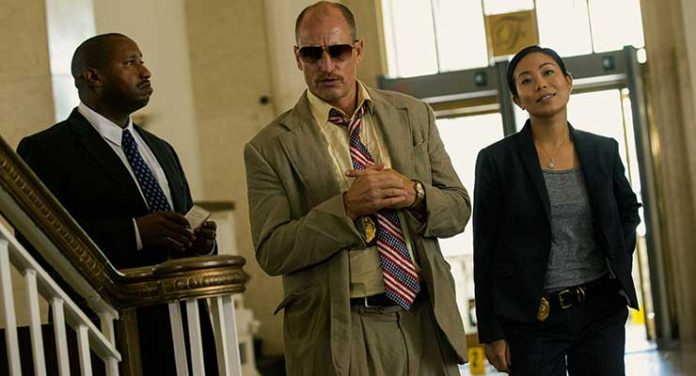 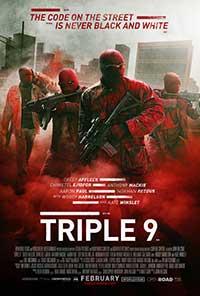 Taking place in Atlanta, and with an all-star cast, Triple 9 focuses on several characters, but it’s Chris Allen’s (Casey Affleck) story. He’s been moved from a zone 2 position (crossing guard) to that of a police detective, serving under his uncle Sergeant Detective Jeffrey Allen (Woody Harrelson). But among the rest of Allen’s squad are police officers who don’t exactly follow the rules, some of them in fact break them. And the ones that break them are being blackmailed by the Russian Mafia, led by Irina Vlaslov (Kate Winslet looking extremely unrecognizable). Vlaslov has several of the police officers in the palm of her hand

and in her pocket, including Michael Belmont (Chiwetel Ejiofor) and Marcus Atwood (Anthony Mackie). She’s also kidnapped Atwood’s young son born to him by his Russian ex-wife to prove to him that he better finish one last job for her. In an explosive start to the film, Belmont, along with Atwood and Gabe Welch (Aaron Paul) and others pull off a daring heist in an Atlanta downtown bank. It’s a heist that goes smoothly until one of the bags full of money explodes with colored powder, exposing the men on a highway where they have to hijack another car to get away. Meanwhile, local Mexican gangs aren’t too pleased to see the police in their neighborhoods, and the gangs will do whatever it takes to get the cops off their streets. Led

by Pinto (Luis Da Silva), his gang deals drugs and kills cops full-time. But Detective Allen, who has a wife and young baby at home, doesn’t know that he’s being set up in order for the corrupt cops to pull off the last heist in the Department of Homeland Security’s vault under Vlaslov’s orders. It’s a heist where Allen realizes police corruption is too close to home.

Triple 9 is not for the faint at heart. It’s full of severed heads, shootouts and brutal arrests. We see the story through Aflleck’s eyes — a young naïve cop caught up in a

world he knows nothing about. The star-studded cast all work hard to make Matt Cook’s script as real as possible. Most memorable is Winslet who plays the Russian boss — very cold and calculating who won’t even think twice about killing one of her own. Her Russian accent is very good but starts lilting into English near the end of the film. Director John Hillcoat (who gave us the masterpiece The Road) keeps the action coming at us right and left throughout the film, but it’s the predictable ending that doesn’t quite make this film as good as it should’ve been.