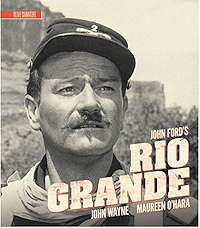 This release of Rio Grande by Olive Films on their Olive Signature imprint is listed as being from a “new High-Definition digital restoration” that appears here in a 1.37:1 AVC 1080p encodement on Blu-ray. It appears to be from the same new transfer completed by Paramount in 2019 that was issued on Blu-ray in the UK by Eureka Entertainment’s Masters of Cinema imprint which I also reviewed. It looks equally good here, with organic film grain, excellent detail for a film of its vintage and inky black levels that just almost tip over into crushing but never quite do. Source damage is not an issue.

The monaural audio mix is provided in DTS-HD Master Audio 2.0 here versus the LPCM 2.0 that Masters of Cinema offered up. Both provide lossless sound, so it’s a wash, but DTS-HD MA will do it in less space. The sound is good given the limitations of the times and the age of the source.

I really like the slate of extras included in this Olive Signature release and think it may edge out the Eureka limited edition release from the UK in quality of actual on-disc featurettes.

*also appears on the UK Masters of Cinema release

For collectors, cinephiles, and western aficionados, this is another a great release of this classic John Wayne western that comes with another slate of great supplements in the form of an excellent audio commentary and contemporary interviews.

Rio Grande is out now on Blu-ray from Olive Films