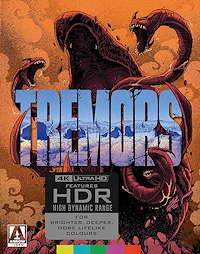 Tremors is the quirky 1990 cult horror/comedy film from director Ron Underwood and co-writers S.S. Wilson and Brent Maddock (Short Circuit). Coming out shortly before the boom in CGI visual effects, this now-cult film which is one of the rare horror films set nearly entirely during the daytime follows a pair of working-class buddies, Val (Kevin Bacon) and Earl (Fred Ward) trying to make it out of their tiny town of Perfection, Nevada (population: 14) when strange gruesome deaths start occurring and trapping them.

As Val and Earl make try to make their way out of town, bodies start turning up dead and mutilated and earthquake-like tremors begin occurring. They discover there are giant, wormlike creatures underground. Scientist Rhonda LeBeck (Finn Carter) in town studying the seismic activity joins the fray as the three and soon the whole town find themselves battling these crazy and dangerous creatures.

Tremors is pretty much nonstop action and Underwood keeps it going from beginning to end. It’s a mixture of western, B-grade horror, and comedy, with gorgeous cinematography from Alexander Gruszynski. Underwood uses the Stephen Spielberg technique from Jaws to keep the practical effect of the monsters or Graboids in this relatively low budget film partially visible to aid with the impact, and it works.

Tremors was originally shot on Arriflex Cameras and lenses on 35mm film stock and this new 4K Ultra HD Blu-ray is taken from a new 4K restoration undertaken by Arrow from the original 35mm camera negative and approved by director Ron Underwood and director of photography Alexander Gruszynski. It arrives framed at 1.85:1 in HEVC 2160p (4K) with Dolby Vision HDR taken from a 4K DI.

The first thing you notice in Tremors and what seems to be a signature of Arrow’s restorations is the film’s grain structure is preserved beautifully even as the film looks quite clean and free of issues with dirt or scratches. There’s so much detail in the close-ups and midrange shots and only an occasional issue with some frames that look out of focus or soft.

The Dolby Vision is used very subtly. If you are looking for highlights with a lot of ‘pop’ you won’t find it here. Just check out the scene starting at 40:39 when it changes from twilight to nighttime. If ever there was a time to see some real ‘pop’ that would be it, but the stars don’t really standout much, even though the shadow detail is superb still. Comparing the same scene on the Blu-ray, there is very little difference. The Dolby Vision on the 4K seems to add more color gradations than on the Blu-ray. Things look more vibrant. For instance, Rhonda’s red shirt in the opening looks really red on the 4K, and the red on the Blu-ray is a little more subtle. The same goes for the color of the dirt and sand where on the 4K there are little hints of terracotta and other colors and on the Blu-ray it looks flatter, like just tans or light browns.

Arrow provides Tremors with a restored version of the original theatrical stereo mix in DTS-HD Master Audio 2.0 as well as DTS-HD Master Audio 4.0 Surround and remixed DTS-HD Master Audio 5.1. There’s really no way to go wrong with any of these three mixes. The dialogue is the clearest and fullest in the new 5.1 mix, but the 4.0 and 5.1 are quite similar and engaging with wide separation, placement of sound effects, and the spread of the musical score. The stereo mix is also no slouch for anyone wanting to stick with authenticity, offering up great dynamics, wide stereo imaging, and clean dialogue.

This is what five-star, premium, collector’s edition special features looks like. All credit to Arrow for not only gathering together hours of new and archival featurettes, documentaries, and commentaries that are worth sitting down and watching or listening to, but also including lots of collectibles.

A gorgeous, bonus-packed release for this fun, cult horror/comedy film out on 4K from Arrow. Recommended for horror fans or comedy fans.

If you found this review useful please consider clicking the button below and donating to help keep TheaterByte funded and to allow us to continue posting great content.

Tremors (2-disc Limited Edition) is out on December 15, 2020 from Arrow Video