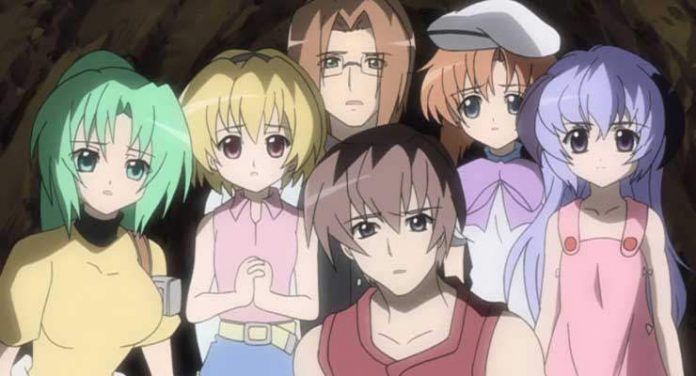 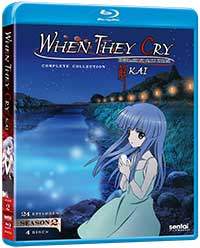 When They Cry Kai returns to the fictional rural Japanese village Hinamizawa in June 1983 where the violent, mysterious, and circular events of When They Cry took place. I was impressed with season one’s storytelling techniques, the build up of tension and the juxtaposition of its moe style, comedy, and ultimately violent and gruesome outcome (the series ran into controversy in its native Japan and was suspended from the air by broadcasters when a similar murder to the storyline took place). While When They Cry was certainly unique, it did show some flaws in its repetitive nature. Those flaws are only exposed even more in When They Cry Kai.

When They Cry. Now, however, the answers to the brutal events are unveiled. Rika keeps dying and returning to June, 1983 and reliving the fateful days leading up to the cotton floating festival. Meanwhile, Mamoru Akasaka and Officer Oishi investigate the Great Hinamizawa disaster that claimed the lives of nearly everyone in the town besides Rena, who was imprisoned for her murderous rampage.

The story in Kai begins to show its visual novel roots, becoming more and more convoluted even as it answers many of the questions left unresolved from season one. Perhaps those questions should have remained unanswered and left When they Cry as one nearly perfect little capsule of psychological thriller. Here, in Kai, we get lots of supernatural mumbo jumbo, alien viruses, time travel paradoxes, and more questions that don’t add up to much. At least the style and mood remain consistently high. Too bad the story is too boring to really sit through for too long.

When They Cry Kai comes to Blu-ray in an AVC 1080i encodement from Sentai Filmworks. Given that the digital animation was originally done in standard definition, there isn’t much that this upscaled Blu-ray can do to improve the image quality. It looks about as good as it can get, and it is just a slight improvement over a DVD given the added bandwidth and lower rate of compression, but the image is soft, motion artifacts like jagged edges around the line art can be spotted, and colors are a bit washed out.

The Japanese voice cast are superb, that’s for sure, but the DTS-HD Master Audio 2.0 stereo track has only

subtle stereo imaging and dynamics. I am just as unimpressed with the sound on this second season release as I was with the first season’s sound.

When They Cry Kai comes with nothing extras besides some Sentai Filmworks trailers, which is disappointing. They haven’t even included clean opening and closings, which, in all honesty, wouldn’t look that great given the standard definition source.

A disappointing second season of what was a very well done thriller, When They Cry Kai has all the elements of the original that made it good, but they are mixed together in all the wrong ways. The Blu-ray is just average, but good enough considering the source.