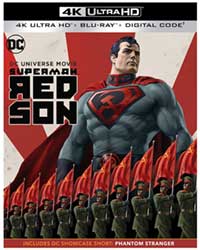 Superman: Red Son is a DC Elseworlds tale that ponders what would have happened if Superman had crash-landed in Soviet-era Russia rather than in Kansas. An alternate reality unfolds wherein Superman is an agent of the Soviet communist regime helping to spearhead the spread of the ideology globally, in the West Lois Lane is now married to technological genius Lex Luthor who is leading the campaign in America to develop their own American Superman in order to counter the Super Red Menace. This DC Universe original is one of the better original films they have done. In the vein of series like The Man in the High Castle, this one does offer some thoughtful possibilities even if this is a fictional character, but Superman is so ubiquitous in popular culture that taking the American icon to the Soviet side during the Cold War era has major psychological implications that could probably never be measured. The film is, of course, action-packed, well animated in a classic American animation style with hints of Russian avant-garde art and lots of detail artwork in the backgrounds.

Superman: Red Son arrives on 4K Ultra HD Blu-ray with a 1.78:1 HEVC 2160p (4K) transfer with HDR10. The animation looks vibrant, with rich primary colors, particularly the reds which really standout. The WCG really brings out the color fills in the animation even more so than on the Blu-ray, where the colors look strong but less nuanced and less vivid. Highlights also ‘pop’ nicely. Just check out the heat vision from Superman’s eyes or lights and fires. There’s also a filmic quality imparted to the image so it doesn’t look absolutely digital and a bit more organic.

The on-disc bonus features for Superman: Red Son are all on the included Blu-ray, which also includes the feature in high definition. A Movies Anywhere digital movie code is also included.

The Elseworlds line is a great way to experience the tried and true DC characters from a different perspective without needing to worry about DC canon. Superman: Red Son comes close to Batman: Gotham by Gaslight in quality and originality and the 4K Ultra HD is one of the best releases on the format from DC Universe.