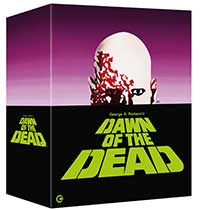 Load more
Prepare yourself for the classic zombie apocalypse in 4K as all three cuts of Romero's epic sequel get awesome 4K restorations housed in a beautiful package bursting at the seams with bonus materials. Dawn of the Dead (Limited Edition) (4K Ultra HD Blu-ray Review)