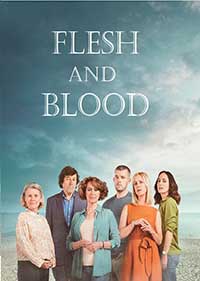 At the very beginning of this four-episode mini-series, we are shown an accident scene at a beach house. Spoiler alert: the subsequent police interrogations of Vivien, her children, and Mary leave little doubt as to the identity of the victim. The widow Vivien (Francesca Annis) embarks on a new romance with widower and retired surgeon Mark Kinneally (Stephen Rea). Vivien’s children Helen (Claudie Blakley), Jake (Russell Tovey), and Natalie (Lydia Leonard) are not thrilled with this relationship since they know so little about Mark and their father Terry has been dead for “only” eighteen months.

Vivien and Mark have planned a long trip to India for their belated honeymoon.  When the three children investigate the suicide of Mark’s wife and his benefitting from her estate, they air their concerns to Vivien who summarily brushes them off. The dramatic crux of this series takes place at the family beach house where a 70th birthday party is being held for Vivien with all of  the principals in attendance.

Load more
Masterpiece: Flesh and Blood (TV Series Review)A British psychological drama that finds three self-absorbed adult children having problems with their mother's remarriage to a man that they know little about but whom they suspect might have been involved with his late wife's death.